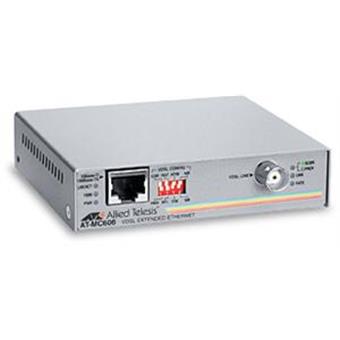 There are over 40 million analog surveillance cameras in operation around the world, the vast majority of them being connected using coax cable. As operators replace these aging cameras with modern digital cameras, they also have the problem of either having to replace the coax cable (costly), or finding a way to reuse the existing cable. The AT-MC606 connects an Ethernet or Fast Ethernet UTP connection over a coax cable at distances up to 2km. Operating in an asymmetrical mode, the high upsteam bandwidth is used to carry the video data, whilst the smaller downsteam bandwidth is used to transport camera commands (zoom, focus, pan, tilt, etc). Given the bandwidth that a pair of AT-MC606 can transmit, multiple digital cameras can be connected over a single coax cable when used in conjuction with an Ethernet switch.